Walking football has become increasingly popular over recent years and is suitable for people who may have mobility problems which stop them playing faster paced games. It’s a popular activity at both Kimberley Leisure Centre and Chilwell Olympia.

Kimberley Walking Football Club (affiliated to Priory Celtic) can now boast two England trialists in their ranks. Geoff Cooper (65) and Stewart Crisp (68) who were recently invited to the national centre in Solihull, Birmingham to pit their skills with and against 34 other players in the over 60’s category.

This gave Geoff and Stewart the opportunity to re-live their long lost youth playing in seven 10 minute games during the afternoon. Any temptation to sprint (note likely at a combined age of 133!), run or jog was strictly forbidden and would result in a blue card penalty of two minutes in the ‘sin bin’ for three offences.

Geoff and Stewart, who both avoided the ‘sin bin’, are regular players at the two outdoor walking football sessions held at Kimberley Leisure Centre on Monday and Thursday mornings which take place from 11.00am – 12noon  throughout the year.

Whilst the rules are not so strictly interpreted as at international level the games are competitive, good fun and open to anyone over the age of 50 who enjoys a kick around with a ball. The banter, chat and jokes circa 1970 continue in the showers and  the free coffee room after the games’.

It’s just £2 to play, and there’s no need to book. Just meet at the 3G pitch near the entrance to the leisure centre. 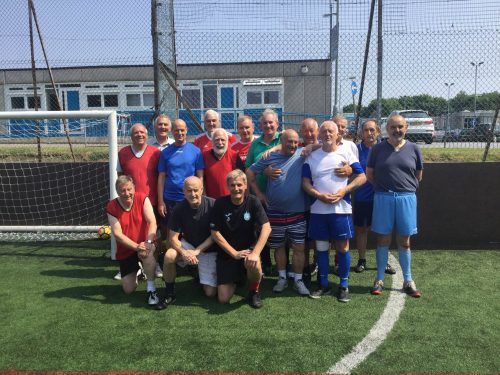